The Danish Energy Agency is assisting Chinese developers and the Chinese government in their efforts to create a viable offshore wind industry, transferring Denmark’s more than 30-year experience from offshore wind developments. The Quality Offshore project which has China’s National Energy Administration as its main partner last week held a successful workshop in Beijing.

On Friday 09 March 2018 the Danish Energy Agency and the Embassy of Denmark to China hosted a workshop with more than 65 participants on offshore wind in China. Part of the Quality Wind project, the workshop focused on both regulation and on improving the conditions for investments in in industry which is about to take off. Director General Zhu Ming from NEA as well as the Danish Ambassador to China, Carsten Damsgaard opened the workshop with speeches.

China has a long coastline of some 13,000 km and estimates say that technical potential for offshore is around 500 GW counting water depths below 50 meters. This complex industry is still young but gaining momentum and 2017 brought about more than 1 GW of newly commissioned projects, bringing the cumulative total to around 2.8 GW.

Up to now, this development has relied mostly on domestic know how and experience as foreign advisers and inputs have been limited. Bringing in foreign expertise can help to ensure that Chinese offshore wind energy is developed according to best-practice.

Significant interests in Danish experiences
The workshop was attended by a number of Chinese central and provincial authorities, as well as engineering institutions and developers.

On the Danish side, several representatives from Danish developers, supply chain companies and consultants participated. One of the Danish participants was Rambøll, who has successfully entered Chinese offshore with contracts on foundation design.

The project was praised by several of the Chinese participants, calling for a continuation of project activities.

The cooperation is one of the outcomes from the visit to Denmark of NEA Administrator Nur Bekri last September. During his meetings with the Danish Minister for Energy, Utilities and Climate, the ministers agreed to initiate cooperation within offshore with an aim to exchange experience on regulatory matters, test and certification as well as look at opportunities for demonstrations projects.

On the Danish side, the project is carried out in a close cooperation between the Ministry of Foreign Affairs, the Danish Embassy in Beijing and the Danish Energy Agency with the latter as project lead. The project runs for one year (2018) with a possibility for extension.

The Danish Minister Lars Chr. Lilleholt is scheduled to visit China in June 2018 accompanied by a Danish industry delegation.

Energy cooperation between China and Denmark

China and Danmark started government-to-government collaboration on energy in 2006. Since then a long range of activities within renewable energy, scenario planning, power system flexibility, energy efficiency etc. have been carried out in an ever closer relationship between the two countries. Denmark supported the creation of China National Renewable Energy Center in Beijing in 2011 and this center has now established itself as a key think tank for China’ transition to a green energy system. 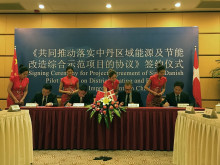 Today, Chinese high level energy officials visit Denmark and the Danish Energy Agency. Denmark has decades of hands on experience in integrating renewables in the energy system, experience that can be of crucial interest to Chinese plans to boost their own green transition.

China: A new program for maximising RE in the Chinese energy system

The Danish Energy Agency (DEA) is publishing a leaflet on how it can help other countries towards a greener future through scenario-based energy planning.

New agreement is to provide Clean Heat to Beijing

The China National Energy Conservation Center and the Danish Energy Agency signed an implementing agreement of a Sino-Danish pilot project on district heating and energy efficiency improvement in Beijing.

Visit from the Chinese Ministry of Energy

A delegation led by the Chinese Deputy Director General for Renewable Energy, Liang Zhipeng, has payed the Danish offshore industry a visit since Monday. The delegation comprises representatives from the Ministry, the Chinese State Grid and other key players in offshore wind in China. 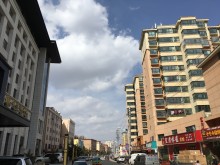 The finest experts on heat planning in China and Denmark are working together in an expert panel created as a part of the Sino-Danish pilot project on energy efficient district heating. The panel held the first meeting this week. 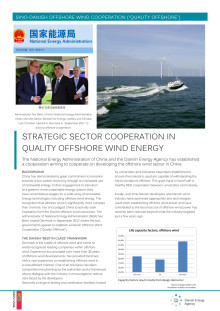